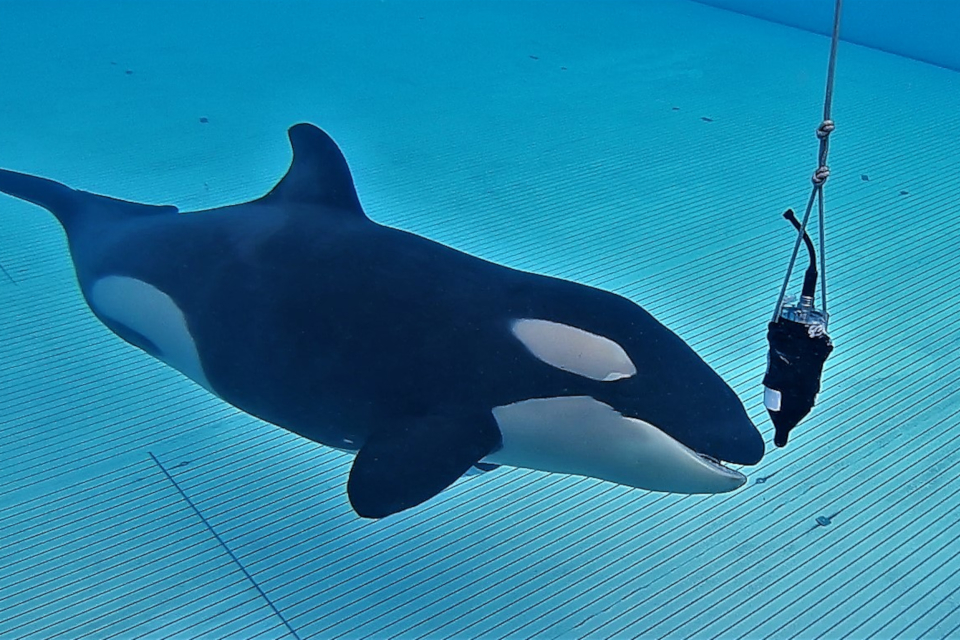 The newspaper BILD as well as the Britisch Mirror, have included already disproved and incorrect information from the animal rights industry, into a questionable coverage.

It is always annoying when the media report deficiently or wrongly. A BILD coverage from today has surprised us a lot. With a video, they have reported about one of the orca baby Ula´s “crippled” fins. She apparently also has a “skin infection, that is under control” and her head shape traces back to her “origin from different orca populations”. The source named is Loro Parque.

This surprised us, since we have been reporting about Ula for a while. We therefore contacted Dr. Javier Almunia, the scientific director of the Loro Parque Fundación, who had given the interview that was related to. He confirmed what we suspected: The way BILD reported it, is inacurate.

The animal has no skin infection. There was one, but it was healed after successful treatment. On current pictures Ula looks completely healthy. It is normal, at an early stage in a young dolphins life, for it to come to an infection, when the immune system is still developing. Latter builds up in the first three months of the dolphins life. During this time, it comes to an infection naturally, this practically challenges the immune system, so that it can fully build up. This is true for the dolphinarium as well as the wild. The major difference though, is the fact that in zoos the animals are cared for by veterinarian specialists, while in nature – unperceived by humans – they often die at a young age from such infections.

A while back, Ula also had an infection. However, Javier Almunia clearly explained that this skin infection was overcome, after successful veterinarian treatment, long ago. The expert on marine mammals also explained that he had phrased this very clearly, so as to avoid any misconceptions. This did not interest the responsible editor, apparently Beate Krause. That Ula is healthy, that her fin looks normal again and that she is having a wonderful time with her mother, was apparently too unspectacular for Ms Krause.

Javier Almunia also explained the thing about the different ecotypes differently. He made clear that the animals appearance always differs and those who look closely, will quickly see how different orcas can be. The head shape also varies: When speaking to the trainers, you quickly find out that the head shape is one of the distinctive features they use. Ulas head shape is completely normal – that is the way orcas look. That on some pictures it doesn´t match the classical idea of an orca, could possibly be due to the fact that several ecotypes have an influence in Ulas case, Javier Almunia suspected.

Beate Krause is not really known for reporting fairly about orcas under human care. A few years ago, she wrote an article about the orca keeping at SeaWorld, which seemed directly dictated to her by anti SeaWorld activists. She related to their disinformation too clearly. The article on Ula hardly any better.

We have already explained that the conversation with Javier Almunia was incorrectly reproduced. Additionally, Beate Krause unfortunately shows that, after almost 20 years of journalistic work at Springer, she still hasn´t understood the difference between animal rights extremists and true animal welfarists. And so it comes to ideologically blinded pseudo experts, being allowed to express themselves, or radical animal rights organisations, known also for manipulating evidence, being considered without any questioning.

What else is to be expected, the newspaper at hand being the BILD newspaper? – could now be said, but that would not be fair. Fortunately there are also competent journalists at BILD, who write well researched articles and reports. Hopefully, in the future, these journalists will be entrusted with reporting competently about orcas under human care. These fascinating animals and the institutions, like Loro Parque and SeaWorld, that advocate their protection and that of nature, in an exemplary manner, deserve it.

Sarah Arnold and Nada Farhoud “exclusively” announce, that an orca baby has been born in a popular Spanish zoo. This “exclusive” information has been public since last September. That both journalists have no clue is shown by the sentence that follows: „She will grow to be five metres long, be able swim up to 100 miles a day and dive to 500ft”.

Without any questioning, the authors also spread the tales of NGOs, that have no experience in the modern and animal-friendly keeping of orcas. Likewise, the dubious activist Ingrid Visser gets her say. That she has failed many times before every possible court, with the same conspiracy theories, was naturally left out.

The same poor and dubious journalism, can also be found in other countries. It is actually a global problem, that there are would-be poets, who reproduce without any questioning, anything pseudo experts tells them. Pseudo experts who would probably sell their souls for a bit of attention, for the NGO that is paying them or is their own. This is being regarded critically for a long time now, as it is responsible for a lot of circulating fake news.

The reasons for it are diverse. Some journalists get paid for it, others sympathise with the NGOs they report for and others are not competent enough to unmask such obvious lies. The truth is: Morgan and Ula are very well. They are both healthy and neither of them look abnormal. Anything else is all fake news, anyone visiting Loro Parque can confirm this. The animals are not being hidden, they can both be seen from the visitors area, in the pools at the back. So everyone can see, that they are both doing well.