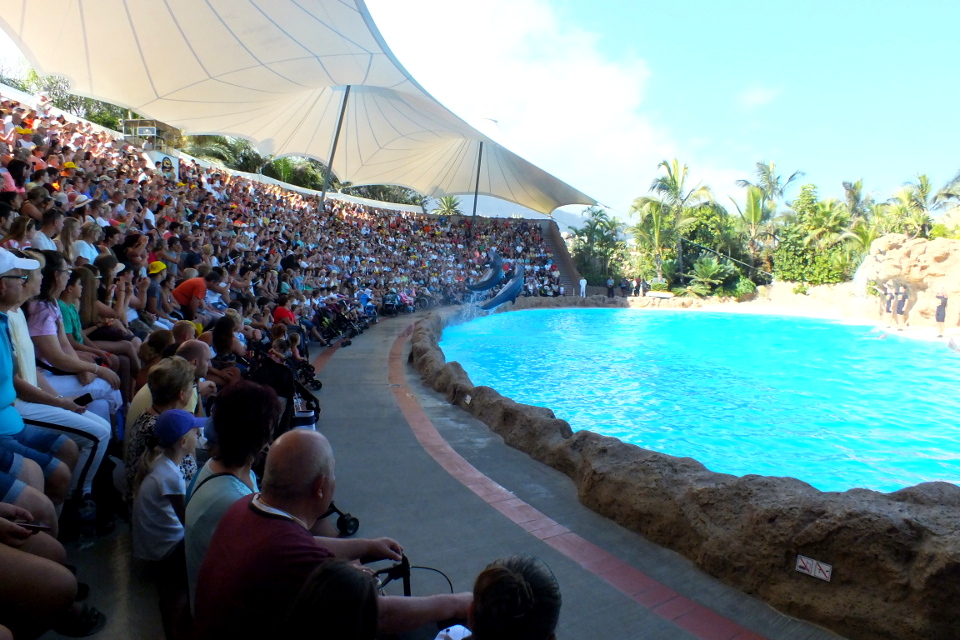 An article from El Español with reference to a scientific study of European dolphins explains the possibilities for interpretation of the results. Here is the English translation.

The dolphins’ fear of freedom: they are much happier at the zoo

A new study by Loro Parque in Tenerife refutes the theory that animals in captivity are exposed to more stress. This is confirmed by cortisol hormone measurements, the secretion of which is a physiological reaction to dangers.

More than 6 million litres of water are distributed in a system of six large interconnected pools which comprise the habitat of a group of eleven dolphins in Loro Parque on Tenerife. On the edge of one of these pools, we are greeted by Javier Almunia, a doctor of biology and expert on the bioacoustics of whales. “Unlike one large pool, a system of several connected basins offers more opportunities to keep the social group united.”

From one of the tunnels connecting this water system floats out one of the dolphins. He approaches the edge to watch us … it seems we are not that interesting for him as he disappears after a few seconds, looking for one of the balls that float in the water, and starts playing.

For many years, the belief has been propagated that dolphins in captivity are exposed to acute stress and thus their lives become impossible. “It is an absurd idea which, however, has penetrated certain sectors, and the work done in aquariums and zoos is brought into disrepute without any scientific reason” says Almunia, who is also a director of the Loro Parque Foundation.

In November 2015, a team of researchers and biologists from the park initiated a project to determine cortisol levels in dolphins in order to establish the conditions under which animals are exposed to stress in human custody.

The obvious first question is: How is it possible to measure stress in a dolphin?

“The clearest and most significant feature for vertebrates is cortisol,” explains Javier Almunia, “a hormone secreted by the organism as a physiological response to environmental hazards or changes in the environment.”

There are various characteristics, such as the heart rate or the body temperature, but the cortisol level is the most accurate of all indicators for stress in vertebrates. The original idea of the project, which has already lasted for two years, was to carry out a study at European level to obtain the largest possible number of samples from nine different zoos distributed throughout the continent.” To date, the studies have always been carried out with small groups of animals and we do not know if these results are significant,” says Almunia.

The new study covers not only 59 animals (30 females and 29 males) from different European institutions but also a system for more effective collection of stress measurement samples. “To date, it has been standard practice to measure cortisol in the blood, but this method of extraction can increase stress in animals, which is why we use a harmless and painless, non-invasive method for dolphins: saliva measurement”.

The use of saliva samples for cortisol level measurement allows the researchers to determine different values at different times without disturbing or harming the animal by triggering stress through the taking of blood.

What biologists call basal cortisol indicates the normal stress level under which a living being should move. “In dolphins, the basal range is between ‘undetectable’ (situations where the dolphin is so calm that the cortisol level is hardly detectable in the saliva by the lab) and 0.3 nanograms per millilitre. These are the values that represent the normal cortisol level,” explains Almunia.

From November 2015 to June 2016, the nine European aquariums using the same method had the extraction of saliva samples from their dolphins analysed by an independent laboratory of the Autonomous University of Barcelona.

The results of this European study, presented at the 45th International Symposium of the European Association for Aquatic Mammals in Genoa, are clear and unambiguous: 95% of the saliva samples have a cortisol level within the normal stress level. In addition, the cortisol level was so low in 49%, more than 600 samples, that it could not be determined in the laboratory.

“At the beginning it was not the goal to know whether dolphins in human custody have more or less stress than dolphins in the wild. Actually, we wanted to find the area of the basal cortisol, that is, the normal level of stress in a large sample of dolphins in aquariums,” says the biologist. “In this way, any researcher or caregiver who wants to measure the stress of his animals is given a clear reference for what is a normal level and he can thus see changes in the physical condition of his animals”.

However, the study with the confirmed cortisol data is not finished, and a second step appeared logical: to compare the recorded stress values of dolphins in aquariums with those of the animals in the wild.

Fortunately, there is a well-known group of wild dolphins in Sarasota Bay, Florida, which have been part of different studies for decades and whose cortisol values have been recorded.

The stress level of these wild dolphins also shows slightly more stress in the range of normal values of the cortisol compared to dolphins in human care.” The samples thus captured from the dolphins in the wild, like those of the captive, were within the normal parameters and generally similar. In fact, the samples of the dolphins in captivity show up to 25% less cortisol than for of those in the wild,” says Javier Almunia.

The cortisol levels recorded in the dolphinarium during the past two years are between zero (undetectable) and 0.373 ng/ml, whereas the figures for free dolphins are between 0.091 and 0.421 ng/ml.

“That dolphins in freedom have more stress ends all the debates at a stroke,” concludes Almunia.” Ultimately, when you think about it, it makes sense: an animal in the wild must be vigilant at all times: it has to take care of its food (hunger is one of the factors that increases the cortisol level and therefore a major stress factor), mast always be vigilant to defend itself against predators or unexpected attacks and, of course, must also avoid fishing boats and nets, etc.”.

In contrast, dolphins in European facilities have conditions that are the same all the time. This significantly reduces stress. They do not have to worry about external threats, the water is constantly cleaned to prevent contamination and they are fed every day.” The cortisol levels measured are lower because the animals do not have to be constantly alert. Stress can be temporarily increased because of disputes within the group, alpha-males or diseases”.

In addition, Dr. Almunia would like to take the opportunity to “demystify a bit the negative effects of stress in nature. Living beings have their warning mechanisms in response to unexpected changes in their environment. This is a natural reaction and is necessary for the survival of each animal. What is harmful is chronic stress, when it becomes chronic and the stress situation is prolonged temporally and begins to have a harmful effect… Well, thanks to this study, keepers have a useful tool, so that we can take better care of our dolphins.”

“The study confirms that dolphins do not suffer from chronic stress in human custody in facilities and zoos, their cortisol levels are normal and indeed lower than in groups in the wild. But I am afraid that the urban myth of stress in captured dolphins will continue to do its work. Despite scientific evidence in recent decades, these myths are not easy to destroy.”