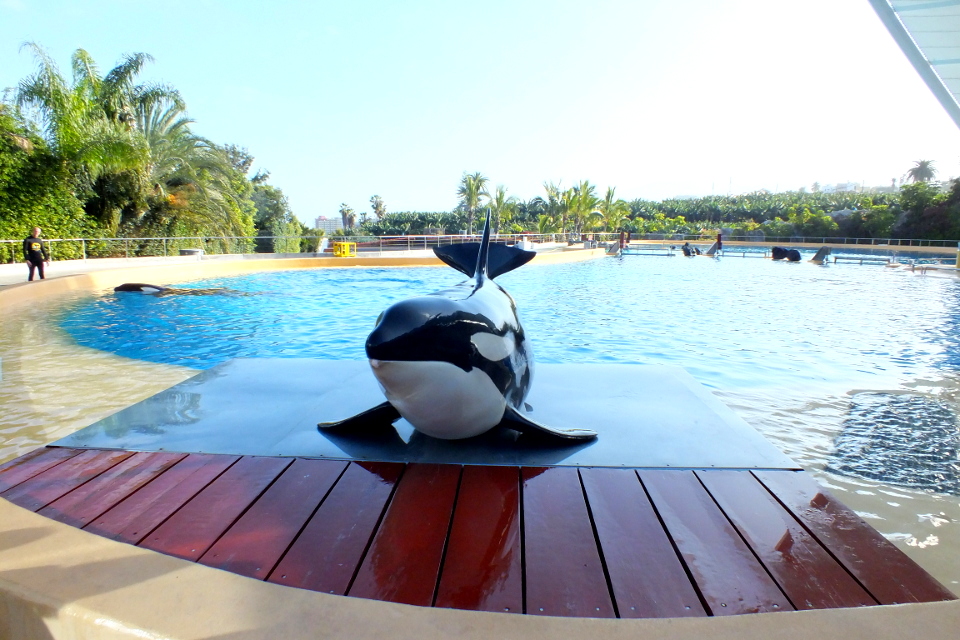 Free Morgan Foundation is not a trustworthy organization and published some untenable allegations against Loro Parque concerning the pregnancy of orca Morgan.

Free Morgan Foundation is known for providing false information on orca Morgan and killer whales in general. Now, this intransparent organization claims, in its last publication, that either Loro Parque lied or the “care is so poor that they neglected Morgan to the point that they really didn’t know that she was pregnant, for five whole months”. You can literally read in such statements that none of these “wannabe-experts” has got any professional experience with caring for orcas.

How to observe a pregnancy

It’s not easy to observe a pregnancy in killer whales because you don’t constantly test it – especially when you don’t await it. In killer whales, only data of a few pregnancies exist and especially recognizing it during the first months isn’t as easy as laymen like those from Free Morgan Foundation apparently think. The babies aren’t as big and not easy to see via ultrasound.

In professional husbandries, you just don’t publish a pregnancy which is not 100% confirmed. At Loro Parque, an independent expert in veterinary medicine in addition double checked such important findings in the animals. As soon as this was done, the great news was published.

Urine and blood testing are not 100% accurate. So, you have to wait until you 100% confirm a fetus with ultrasound. This takes some time and also trustworthy, independent experts don’t sit constantly at home and wait for a call because they’ve got nothing else to do. The best experts are constantly traveling around the world and a pregnancy isn’t an emergency.

Loro Parque is not like the Free Morgan Foundation, which is often enough spreading scientifically and evidently unsupported theories. As a scientifically managed zoo, the awarded, accredited and certified Loro Parque shares about orcas what they know 100%. Morgan was exposed to pollutants in the wild for many years and if you see something growing in her uterus or she doesn’t ovulate, this could be caused by many reasons– maybe even something we already don’t know.

So, you first have to exclude everything and double check your data and results. This is how modern zoos and aquariums work – especially concerning sensitive topics like orca pregnancies. This young whale lady is a very special orca and just communicating something about her pregnancy without being 100% sure, would be wrong, untrustworthy and potentially misleading.

Free Morgan Foundation doesn’t understand this because it’s the business of this foundation to be wrong, untrustworthy and misleading – otherwise, they wouldn’t get donations apparently. Ingrid Visser and her collaborators still stick to wrong facts which they failed with in front of eight courts of all possible instances in the Netherlands. They are still selling their misinformation to ignorant and gullible people.

Morgan was allowed to become pregnant

One of the lies the foundation sells to people is that Morgan wouldn’t be allowed to get pregnant. This is just wrong. She was allowed and she is allowed. Moreover, a general breeding ban for orcas wouldn’t be in accordance to the EU’s zoos directive and would also violate animal welfare guidelines.

Orcas live in family groups. This is their normal social environment which can be perfectly rebuilt in modern zoological institutions as long as they have got a working breeding program. Moreover, there is no procedure to prevent breeding in the long-term without significantly decreasing the welfare of these animals through e.g. separation or medication.

Neither her transport permit nor the law in the Netherlands, Spain or the EU, in general, prohibits her to reproduce. Also, the breeding ban of SeaWorld didn’t affect her because she was never owned by this institution. Orcas have sex on regular basis and Loro Parque decided to allow her this natural behavior.

Free Morgan Foundation bases on the wrong claims, conspiracy theories and ridiculous statements of Ingrid Visser, who they name an expert. This wannabe-expert never successfully cared for orcas in human care. She caught one orca, which died in her improper care in a swimming pool in New Zealand.

So, Visser already proved that she’s not able to do a better job than true experts in accredited and certified facilities; although she wants to start her own orca husbandry and aims to get Morgan for this questionable purpose. Being in Vissers care would be a nightmare for Morgan and every orca because she already proved many times that she has got no expertise in professionally caring for orcas and doesn’t even have enough theoretical knowledge about killer whales in human care.

As you can easily see, Visser has her own agenda and she’s neither trustworthy nor unbiased because she frequently cooperates with the animal rights industry which is also a part of this. She already lost all scientific credibility by sharing wrong information on killer whales and recently she, who is not a veterinarian, co-authored a paper of fake science in which she acted to be able to do health assessments of orcas basing on questionable fotographs, which is completely ridiculous.

Confirming the facts and stopping the misinformation would result in no donations for the Free Morgan Foundation, people like Visser and her collaborators, as well as the multi-million dollar animals rights industry that benefits from these donations. So, it’s about a lot of money and this is what, according to an experienced member, the animal rights industry mostly cares about.