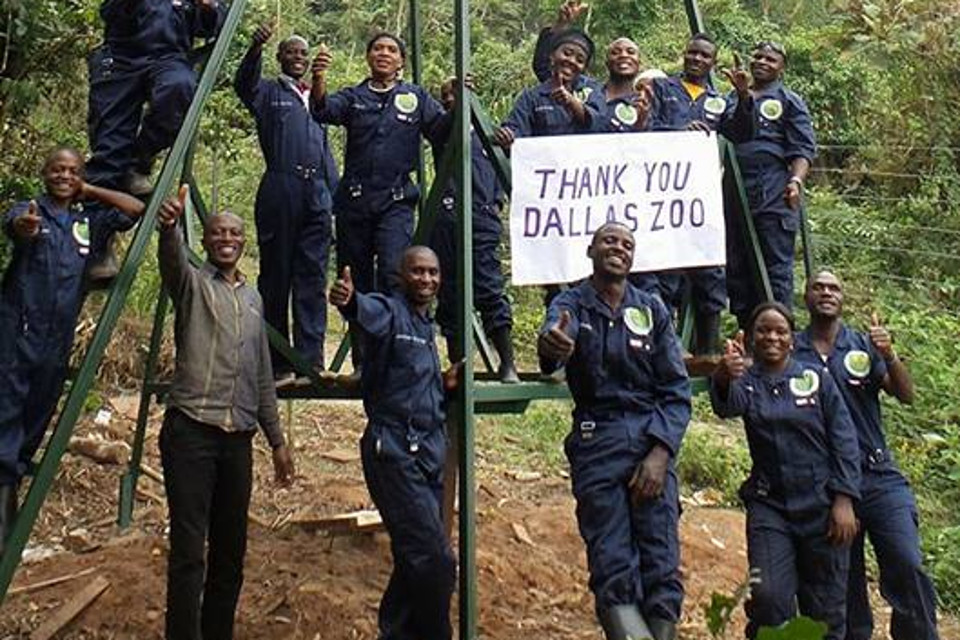 „Thank you Dallas Zoo“ With these words the team of the Gorilla Rehabilitation and Conservation Education Center (GRACE) thanked Dallas Zoo, because the zoo sold T-shirts during World Gorilla Day to raise funds for the observation towers for the new gorilla habitat and the tower could be built. It’s another example for the importance of modern zoos for important conservation efforts.

Gorillas are at the brink of extinction all four subspecies are listed as critically endangered and zoos all over the world try to save gorillas in cooperation with trustworthy conservationists. Gorilla Rehabilitation and Conservation Education Center is a rescue facility specifically designed for the needs of eastern lowland gorillas / Grauer’s gorillas and the first permanent sanctuary ever built for the species. The care for rescued Grauer’s gorillas and aim a reintroduction into the wild to save the wild population, which is massively threatened. According to data collected in the wild in 2004 there were only about 5,000 eastern lowland gorillas in the wild. The population decreased to fewer than 3,800 in 2016.

While zoos mostly concentrate on western lowland gorillas (there is only one Grauer’s gorilla in human care in Europe), zoos can of course help and benefit the work of GRACE and the conservation of these magnificent animals.

“Zoos play a critical role in the work that GRACE is able to accomplish for gorillas, both through financial support and especially through the animal care and veterinary expertise our partner zoos provide.”

So, zoos are important for the conservation of this species. Maybe they will become even more important when in situ conservation wouldn’t be enough to save the species and ex situ breeding programs will be needed to support the wild population. The experiences GRACE gains with the reintroduction will also play an important role if the western or eastern gorillas need support from the captive populations.

It’s awesome when organizations like GRACE and modern zoos are working hand in hand to benefit conservation and a cooperation like this is a hope for the wild gorillas. Without modern zoos and organizations like GRACE many species would have already disappeared, but luckily many people devoted their lives to save animals and they work together to build up a future for gorillas in the wild. Although zoos in cooperation with conservation organizations proved, that it’s possible to rescue and reintroduce species, which were extinct in the wild, we should take care that species are protected in time and stop the populations’ decrease before they become extinct in the wild. This strategy already worked – the most famous example is the giant panda.

In times of the sixth extinction many animals are on the brink of extinction, but protecting gorillas means also protecting the whole ecosystem they share with many other species. Gorillas are just the flagship species. Same as zoos play a critical role in their conservation, the gorillas play a critical role in their natural ecosystem. So, hopefully, the gorillas can be saved to save their whole ecosystem. You can be sure that zoos like Dallas Zoo and conservation organizations like GRACE will do everything humanely possible to rescue the last Grauer’s gorillas and their whole, unique and magnificent species.