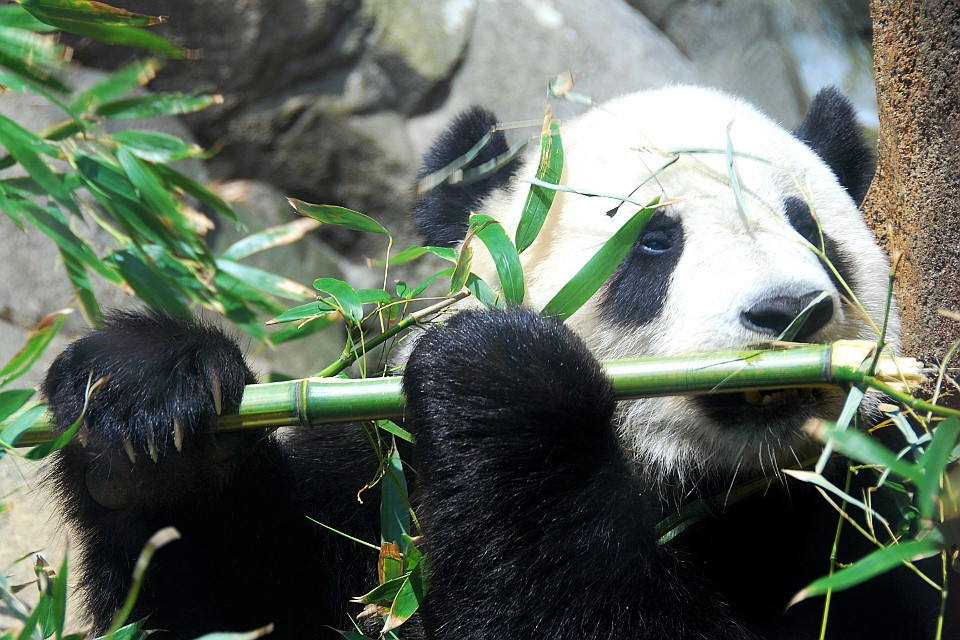 ZEIT journalist Saskia Gerhard shows in her comments an anti-zoo attitude, which however, unbelievably, she supports with lies and disinformation.

Luckily, it is less and less the case that you come across such bad articles as Comment by Saskia Gerhard on zeit.de. This article failed on so many levels, but mainly because it showed the ignorance of its author rather than the actual truth.

Pandas are pretty much the worst example of anti-zoo populism you can find. Why? The Panda Protection Project is a complete spin-off from a zoo and has its roots in the zoo at Chengdu, which has opened an outpost in the Panda Protection Centre after the project became too big to be carried out on the zoo grounds. It was international collaboration between zoos that brought about this important and substantial turning point. Without state-of-the-art zoos, promotion to threatened status would never have been possible.

It seems ridiculous and silly to try to turn the tables on zoos for this. The very summit of impudence is the sentence: “It would have been possible to finance protecting this species without abusing the pandas as show objects.” This sentence is also wrong on many levels. The fact is that it has been possible to finance the protection of species, precisely because the Great Pandas have not been seen or marketed as mere exhibits.
Zoos around the world have conducted educational and research projects to convince the public that these animals need protection and to carry out scientific research on how to effectively implement this protection. Zoos have already saved many species.

Does education not work in the zoo?

Next, an outdated study is dragged in, which is supposed to prove that “a simple zoo visit by children and adolescents is not educational at all”. Why does she not use the most recent study Moss et al. (2017)? Education in zoos works – an excellent example is the Panda project. Before their presence in the zoo, there were black-and-white bears in drawings or black-and-white pelts on photographs. Only through the live experience of the animals did these beings become alive for most people.

She calls this effect into question: “Does a captive animal ask for pity so that zoo visitors get involved in the protection of the same species in the wild?”
Once again, she assumes false premises, because animals in the zoo are not locked up or even prisoners and therefore need no compassion. The Swiss zoologist Heini Hediger once made a very valid point: zoo animals feel like landowners, not prisoners. She makes the common mistake that many zoo-opponents who cannot imagine other people responding differently seem to make. 700,000,000 person enjoy going to the zoo every year – not to watch prisoners, but to spend their free time. For many visitors, it is an added value that the zoo is not just about fun and enjoyment, but also something from which the whole family can learn.

It is an old argument that comes mostly from people who have never studied or evaluated the actual needs of animals: “No zoo can offer an animal to run free like it does outside. It is not right. And even if social animals are kept in groups: their natural social behaviour is usually disturbed in captivity.”

In principle, animals do not have a “free run” in nature. Rather, they are forced to travel long distances because they are looking for food, avoiding enemies or getting to suitable areas because of their temperatures, just to survive. A migrant bird does not fly south because he is a passionate backpacker and loves long-distance trips, but because he will die otherwise. A Southern Resident orca has no pleasure in starving his way across long stretches, in order to get occasionally a few fish in his mostly empty stomach. No creatures want to run a marathon simply to get enough. A society which is increasingly remote from nature, which knows about marathon runs only as a leisure-time fun activity because they are no longer necessary for survival, however, comes to such exactly the wrong conclusions: that animals do the same. Saskia Gerhard also commits this mistake.

In addition, social behaviour is not disturbed: from the meerkat to the orangutan to the elephant, the progress of zoo conservation has resulted in groups with completely normal social behaviour. As for dolphins, the behavioural biologist Dr. Kathleen Dudzinski, one of the experts in the field, if not indeed the expert par excellence, says as follows: “I’ve been studying wild dolphins since the early 90s, and it’s been almost a decade for various captive dolphins. I’ve studied a couple groups of wild dolphins, dolphins [at Dolphin Encounters] and dolphins in Germany, in a man-made pool. And, by collecting data the exact same way, in all the sites, and analyzing it in exactly the same way, in all the sites, we can do direct comparisons. So, we looked at them to see if there are significant differences or similarities in dolphin interaction, and I have not found any significant differences in dolphin behavior when I’ve used those methodologies. So, when you have a group of animals that are healthy and happy and they have a good social environment, I don’t see any differences between wild dolphins and captive dolphins.“

Elephants flip out and dolphins are mentally ill

Elephants worry in captivity and attack their caretakers, she claims. The PETA video, which has not yet been proven at all, is offered as proof. It is highly unprofessional for a journalist to present a lobby video whose accuracy has been questioned as evidence. No modern elephant holder beats his animals to train them. They use blunt guides, such as those in Perth (see photo on the right), to guide the animals, but not to abuse or coerce them.

“Dolphins become mentally ill in cramped water pools, and only high doses of psychopharmaceuticals stop them from attacking members of their species.” This is a completely ridiculous statement because the opposite has long been proven. You can see medication of dolphins in Duisburg online and no psychopharmaceuticals are administered because the animals would otherwise become manic. This is not a common practice in other modern dolphinaria. As mentioned above, the social behaviour of the animals is normal and no medication is necessary to regulate it. In addition, there is no serious source that has ever claimed or confirmed this.
On our Youtube channel we asked the veterinarian from Duisburg Zoo:

Her precise comment is: “When mother animals of different species are stressed, they tend to attack their offspring. This always happens in zoos. Many young animals will also become ill after the birth.” This happens in the wild as well, but it is, of course, not mentioned. Young killer whales have a very high mortality rate of 43%, bottlenose dolphins around 67% and polar bears up to 85%. In modern zoos, these rates are significantly lower, but they can never be brought to zero – that has not even been achieved in humans, who have been much more thoroughly researched.

Is rewilding only rarely successful?

In her one-sided article, the author also asserts that the animals “are only seldom” able to “be returned to the wild after captivity”. This is not true – in particular the blackfoot (photo right) is the best counter-example. But we could also mention the Californian condor and the Przewalski horse. There are many other such species.

Then she claims that the range is very selective: “According to a study published in the magazine Science (Conde et al., 2011), 20 to 25 percent of all threatened mammals worldwide are kept in zoos. Among reptiles, the figure is only three percent. This also goes to show: Cute mammals sell themselves better than lizards. ”
Slightly more than 5,400 mammal species are known, of which one in every four is threatened. Thus, we are speaking of nearly 1,400 species. Zoos, therefore, according to the study quoted by her, hold about 350 species of mammals. In reptiles we are speaking of 10,450 species in total. Every fifth species is threatened. We are talking about 2,100 species. This would indicate about 63 in zoos, were this study to be true.

Now the author has a problem: anyone can see this study. It looks very much as though she has confused reptiles and amphibians. For amphibians zoos held 37% of endangered animal species, as the study argued under reservation, as the final results have not yet been established. For amphibians, the actual figure is about 3%. There are around 7,000 amphibian species. Of these, 41% were included by study for the calculation of the 3%. This brings us to 2,870 species. This is what we are talking about, according to the study of 86 species which are represented in zoos.

Why is that? Modern zoos want to give people an impression of the ecosystem which protects them as a whole. This is presented by means of ambassador species in natural habitats. Most amphibian species do not exceed 20 cm in length and are hard to find in terrariums. If you build an arrow-frog a proper enclosure you cannot represent the rainforest habitat. In order to represent the rainforest, a zoo might build a large house, as amphibians would lose themselves if they did not live in species-specific terrariums, so that the visitors have a chance to see them at all. In order to make this rainforest visible to the visitor, you need larger species from the families of mammals, fish and reptiles.
However, ecosystems benefit from the protection of ambassador species because it is not possible to protect a species in isolation, but you must always keep an eye on the ecosystem as a whole.

It would also have been nice if Saskia Gerhard had read the study to the very end. It states that zoos are the world’s third-largest force in the conservation of biodiversity. The last sentence then rejects her whole argument in the article: “Given the scale of the challenge of biodiversity, it is important that conservation bodies and the political decision-makers consider the potential that zoos can offer as a global network.”

“Can we really go on fooling ourselves that we can save species by locking them up?”

She says: “The fact that sick, old animals in captivity can become quite old, seems to many like a grace that nature does not know. But there are only a few zoo animals each year which are euthanised because keeping them is too expensive, or they simply cannot be used. “This is a perfectly ridiculous assertion. For one thing, these figures are not meaningfully related to each other, it is not easy for animals to be put to sleep in Germany “because keeping them becomes too expensive or they simply cannot be used”. That is not legally possible.

Then she formulates the following remarkable thesis, almost as a quintessence of a parade of embarrassment and easily refutable arguments: “In truth, wild, exotic and cute animals fascinate us – from whom money is to be made.” Zoos, like many cultural institutions, are a subsidy business. You get rich in culture but not rich in money. Anyone who thinks he could use a state-of-the-art zoo with all the associated conservation and education programs to get rich has more than miscalculated. Moreover, the remuneration for the people who work in the industry is comparatively low. It is likely that a zoo keeper will earn a lot less than you can earn as a freelance author over a long working week, which does not end on the weekends. However, a zoo keeper does much more for the protection of nature and species than an author who by writing an article like that has filed her declaration of journalistic bankruptcy.