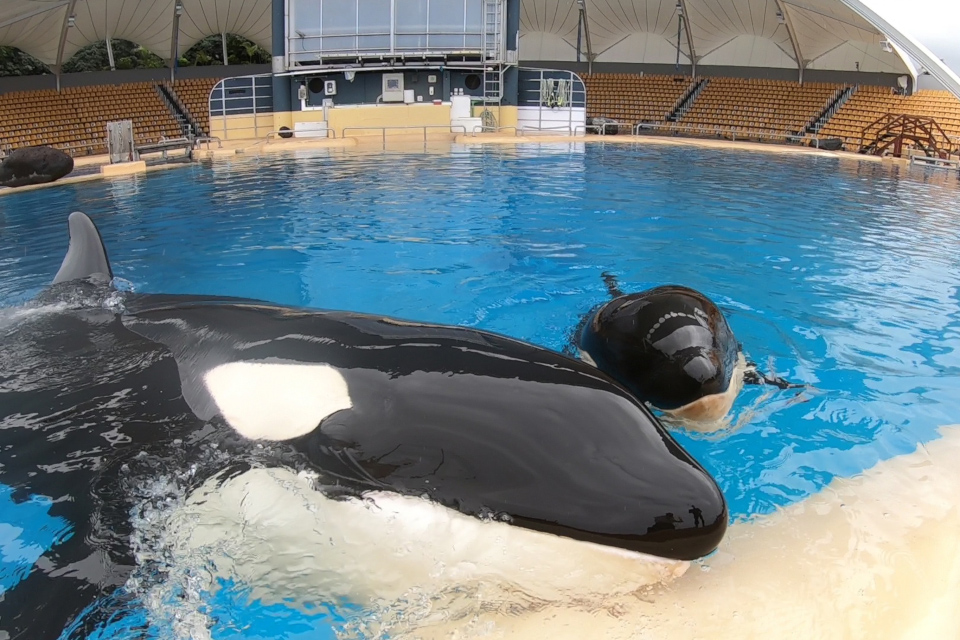 Animal rights activists have circulated a picture of the orca baby Ula, daughter of the orca Morgan, living in Tenerife. The picture turned out to be a fake.

Geezus what the hell is happening with Morgan’s calf Ula (baby Ingrid)? 😳@LoroParque what are you doing to her? pic.twitter.com/hAtVxctBC7

This raised alleged concern for the orca calf, daughter of the famous orca Morgan.

All the commotion led to the most absurd theories, like that by animal rights activist Jeffrey Ventre, who fantasised about a “phototoxic reaction” due to “chronic antibiotic use”, clear proof that this person is not the expert he thinks and claims to be:

If you take a careful look at the photo Fraleigh shared, including the background, you will quickly see something is not quite right: the colours. The walls at Orca Ocean have a totally different yellow than on the fake picture. Loro Parque rightly pointed this out:

As always, we highly appreciate your interest to our regular updates and, on this occasion, we would like to share with you a picture of Ula taken today, Wednesday, November 06. Ula is progressing well and in excellent health condition. pic.twitter.com/P7kEki4kkQ

You can easily tell how the picture was made by comparing the background on both images: they took a photograph of Ula and then pressed the contrast setting until the picture looked like it does. The white on an orca calf is actually not as white as on an adult animal – it tends more towards yellow – you can also find this in nature, as you can see on this picture, or on this other one. By increasing the contrast, you can make any orca calf – be it one living in nature or under human care – look like Ula on the fake.

So there was no “phototoxic reaction” or any other fictional disease made up by pseudo-experts and no misuse of antibiotics – Loro Parque debunked this fake clearly and plausibly. In fact, manipulating pictures in such ways is a trick zoo opponents often use to misinform the public. Some activists, including Ventre, had previously published similar image manipulations.

A comment on Loro Parque’s Facebook page also indicates that Fraleigh actually stole and later edited the picture. Which is why it was taken down on Facebook, on Twitter however it is (still) accessible. If this proves to be true, the fake is an even greater scandal, proving how the animal rights industry sordidly steals third-party property and later manipulates it for disinformation. Loro Parque’s picture from today could frustrate this attempt.

Ula, the young orca calf steeling the hearts of trainers, visitors and people from all over the world, is developing splendidly. On our YouTube channel we regularly report about Ula and her family, as well as the progression she makes.

Such attacks by the animal rights industry don’t hinder anybody from enjoying the reality, which is that things are going great for Ula and her mother. They get along splendidly and the young calf has become a wonderful part of the family, getting along excellently also with the trainers. She plays wildly and thereby shows a luxury-behaviour, animals only show when all their needs are satisfied. In the thumbnail of our video, you can observe a game Ula has invented and which Eric Bogden, new director of the Orca facility, mentions in the interview.

The famous zoo in Tenerife has received multiple certifications, awards and accreditations thanks to the excellent care for its animals. Of course sometimes animals get sick – as anyone who has pets at home will know: even with the best care, there are certain maladies that can’t be prevented. That zoo opponents have started attributing animals diseases they don’t actually have, is a trend we’ve had to observe for some years now. Which is why an amount of healthy scepticism is good when it comes to such pictures.

In addition, at modern zoos and aquariums the doors are wide open: if you have a question about an animal for instance, you can just pose it – be it online or on site. Those who have seen Ula in Loro Parque know how well she is and how wonderfully she is developing. Which is why she has already contributed to the protection of her wild conspecifics. Through the Foundation, Loro Parque engages in the conservation of the endangered orca population in the Strait of Gibraltar and works day and night, so that this population survives.