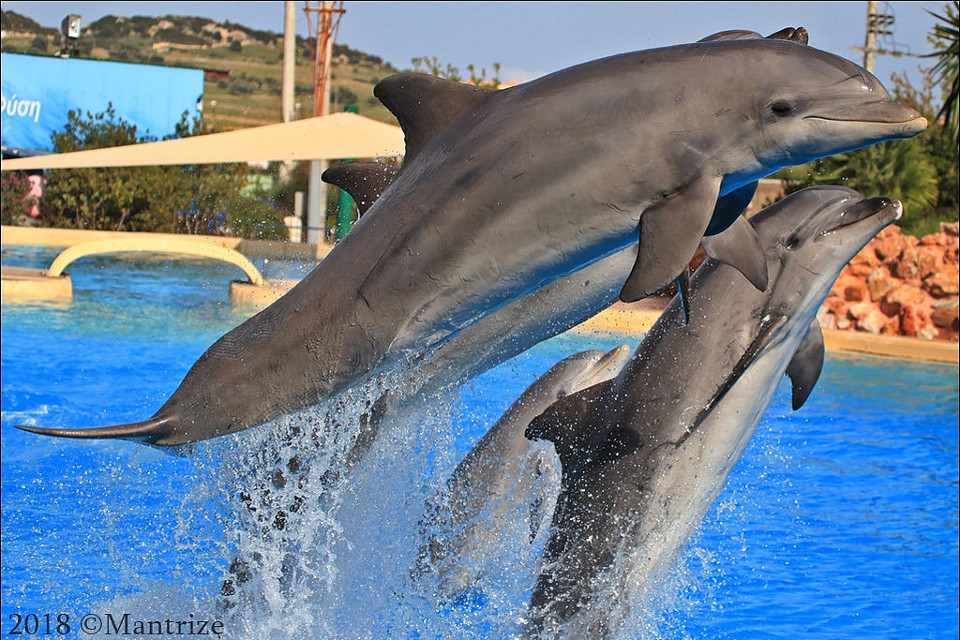 The WDSF and other dolphinarium opponents had demonstrated in front of the Attica Zoological Park (Attica Zoo). After that, apparently, lies were spread as the responsible persons explain.

“All in all, the dolphin protection action in Athens was a complete success against the dolphin attitude”, boasts the WDSF on his Facebook page. Behind the WDSF stands essentially one person: Jürgen Ortmüller, a tax consultant in Hagen (Germany). The WDSF is known due to disinformation campaigns regarding dolphin conservation and protection. Within the organization’s propaganda, crushing defeats in court become victories, demo participants and dead dolphins are counted incorrectly, critics are defamed, and pilot whales were allegedly saved, which could have been saved only with a time travel.

Now the managing director Jürgen Ortmüller was in Athens with a few collaborators, to which the activist Andreas Morlock of Pro Wal and Holocaust relativizer Stefan Bernhard Eck belonged. About this action, the WDSF published on Facebook a post full of “lies”, as the people in charge of the zoo explained. There is also a press release that is likely to fool journalists.

“Shocked by so many lies”

“Lesueur wants to close the dolphinarium immediately, if he sees a possibility to transport the seven dolphins in his zoo to a supervised sea pen, he told the WDSF CEO. Lesueur wants to stop breeding in any case. Since the seven dolphins in the doolphinarium of the zoo came from different countries of origin, but an immediate transfer is not possible, especially as dolphins would have to be released in their original marine areas of their origin and there are currently no corresponding sanctuaries, Lesueur explains.” [Translation of the German press release]

This is repeated on Facebook and the WDSF goes even further:

“The zoo director Lesueur told us he would close the dolphinarium immediately if there was a supervised sea pen for the dolphins, which is currently not the case (see our press release). The only female of the seven dolphins he wanted to get rid of immediately, as it would permanently separate from the dolphin group. As we were able to document (see photos), the female dolphin stays in a small mini pool after the show. One dolphin showed severe injuries to the fin and the flippers (fins) that he allegedly had for 11 years. All dolphins had bite marks all over the body, which come from rank fights in the small concrete installation.
Lesueur said he would not face a staffing problem when closing the facility, as out of a total of 70 employees, only four were responsible for the dolphinarium. The dolphin trainer Robert Gojceta would probably lose his job. Gojceta told the WDSF CEO, Jürgen Ortmüller, that the two dolphinariums in Duisburg and Nuremberg are “terrible and horrible”. He is, however, proud of the Athens Dolphinarium.” [Translation of the German post.]

All this is highly implausible for several reasons. The studbook manager is based in the zoo and so it would be completely absurd to speak out against dolphin breeding. It would also be ridiculous to say that the “dolphins must be reintroduced in their original marine areas of origin”. In fact, only one dolphin, which was caught in the wild, lives in the dolphinarium: the dolphin senior Veera, taken from the Florida wilderness in 1984. Also, the alleged immediate closure was absolutely unbelievable as well as the alleged abasement on the dolphinariums in Duisburg and Nuremberg.

Spoiler alert: the suspicion was correct because none of it is correct.

Biologist Robert Gojecta clarified: “Of course those [pieces of] information are false. I am personally shocked about so much lies spread out.” He never in such a form about the two modern zoos in Duisburg and Nuremberg, which enjoy the highest international recognition.

The actual course of events

So, what really happened? Zoo Director and Founder J.J. Lesueur were also shocked by “outrageous lies and blatant misinterpretation of the truth.”For this reason, he told zoos.media about the exact course of events.

At around 11:00 am the activists entered the zoo, of which the director was informed by his staff. The activist Andreas Morlock had published a “disgusting video” about the zoo a few months ago, according to Lesueur, and was referred because of this dubious coverage of the zoo – of course, he got the ticket price refunded. No other entry was denied. As soon as Eck could identify himself, only Morlock was excluded, because they did not want to have him in the park for obvious reasons.

Subsequently, marine mammal curator Robert Gojecta was called in and he and the director positioned themselves at the dolphinarium, where Eck and Ortmüller then came and watched the show together to discuss. After discussion and program, the expert Gojecta invited Ortmüller and three or four other Germans behind the scenes, where issues raised by the ProWal video were discussed.

“Both Ortmuller and Eck raised at one point the idea of a dolphin sanctuary, and we talked about it in length. During this discussion I clearly stated that, if ever such a venture was realized, and if all infrastructure, staffing and financing were secured, I would consider sending our old female Vera. The reasoning for this is that she is the only wild caught dolphin in our group, and the only female with 6 males, and this means not a socially coherent group as you can imagine. And of course I NEVER talked about sending the other dolphins or “closing the dolphinarium immediately”. This not even a distortion of what I said, these are clear and blatant lies!”

Veera had come from a dolphinarium in Finland some time ago because it closed and she urgently needed a place to live. Thankfully, the Attica Zoological Park has agreed to help out in this emergency. There are no dolphin sanctuaries, but only plans of animal rights organizations who want to make donators pay for that. Even in the planning phase, these sanctuaries have nothing to do with animal welfare husbandry but suggest a tormenting husbandry of the animals and thus contradict also the standards mentioned by Lesueur.

It would also be questionable if it would ever be possible to transport animals from the EEP to such a sanctuary, that did not meet the EAZA standards. There would never be such a transport under a reputable studbook manager.

The goal is currently to hold a group of males and transport Veera to another group with better composition. The Attica Zoo specializes in male groups of mammals and thus makes an important contribution to the breeding programs. In such bachelor groups, males find a good socialization as it also occurs in the wild. However, neither Lesueur nor Gojecta are against the breeding of dolphins or have ever spoken out against it.

Also, one of the activists asked what would happen if he had to close the dolphinarium. “[W]e would have to dismiss most of the staff”, the zoo director said, making it clear to us that there was never any question that this was not a problem.

Both responsible persons showed themselves negatively surprised how wrong and misinforming the events were distributed by the activists. They were transparent and open, willing to talk and trust that the information would be handled seriously. This is undoubtedly the right way, but that this transparency and openness, in the end, will then be so bad misses shocked.

“I think both Robert and myself made a very good job when engaging them and talking openly. Obviously we did not take into account that these people have a very focused agenda and should never be trusted. The only way for them to promote their cause is by telling  lies in order to make our visitors feel guilty that they visit our zoo.“

This is not the first case in which the anti-dolphinaria activists have been conspicuous and tell the same lies over and over again, despite the transparency of dolphinariums. Modern zoos and aquariums already could often refute the lies of the animal rights industry, especially in relation to dolphins, with scientific facts, but activists hold on to these lies because these lies flush money into the coffers of organizations, which then tend to be very intransparent with these donations bypass.

The activists, led by Morlock and Ortmüller, wanted to give a false picture of the Attica Zoological Park and its dolphinarium, but failed, as so often before. Probably in order to cover that up, they made up such “lies”, as the responsible persons quite aptly described these claims.

Not the first time the activists lied

It was not the first time that the WDSF (essentially responsible is anti-dolphinaria activist Jürgen Ortmüller, a tax adviser in Hagen, Germany) has been spreading misinformation. So, he wants to have rescued pilot whales at 2.30pm from a hunt that had been officially canceled more than 2.5 hours earlier as dolphinaria.truth reported. One year later, he then gave a wrong file number to a lawsuit that he actually wanted to have won. No only his evidence for this statement fell, but also media representatives who had taken over the reports of the WDSF unchecked had been demasked. We ourselves had been able to prove the WDSF spread false numbers of deaths at Duisburg Zoo’s dolphinarium.

These were just three of many examples that show what is constantly happening in the animal rights industry: lies are used by the activists to profile themselves and discredit dolphinariums. We see that every day in the whole scene.