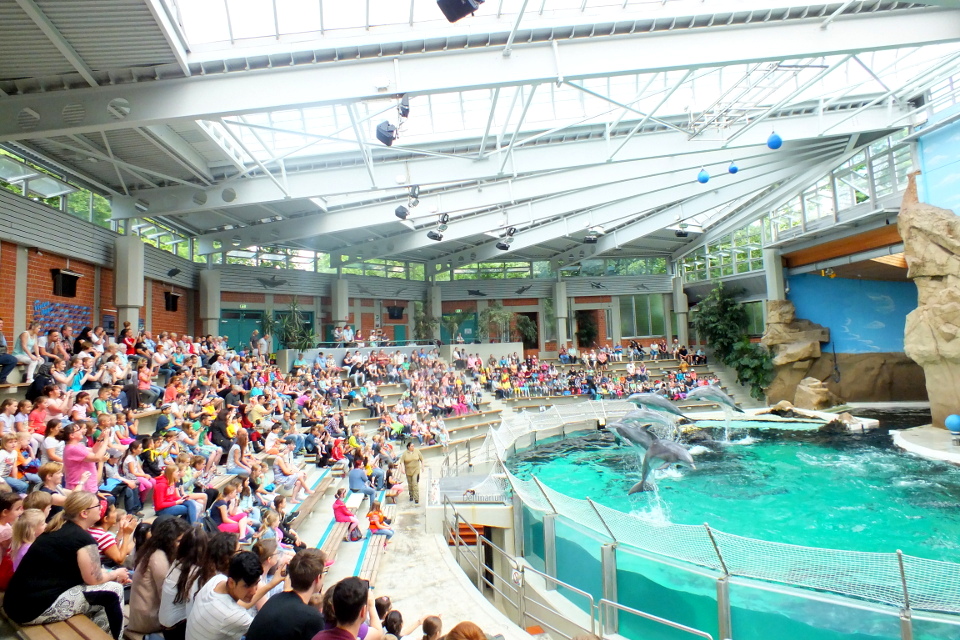 Our author considers an accusation made by dolphinarium opponents against the zoo in Duisburg.

Dolphinarium opponents are excelling themselves with superlatives on the subject of Duisburg Zoo and its dolphinarium. Richard O’Barry has dubbed the Duisburg Zoo as the “largest dolphin cemetery in the world” and another dolphinarium opponent has called it the “largest dolphin cemetery in Europe”. So you may be thinking: what is the truth? Both claims are wrong and this article explains why.

The author of this allegation is the WDSF, a one-man anti-dolphinarium organisation. The basis of the charge is the following claim:

Research data from the annual reports of Duisburg Zoo have shown that from 1965 to 1984 at least 49 whales and dolphins were imported and subsequently died:
17 Bottlenose dolphins
17 Jacobita dolphins
5 Porpoises
5 Pig whales
3 Beluga whales (native to the Arctic)
2 Sotalia dolphins

This data is incorrect.

There were not five porpoises, but three; there were not seventeen Jacobitas, but fourteen. Furthermore, one did not die in Duisburg. No river dolphins or Belugas (not Beluga whales, but either Belugas or White Whales) have yet died, rather they are still swimming as healthily and happily as in biblical times (as measured by the life expectancy of their species). You can see that the numbers do not add up.

It is a highly questionable procedure to apparently make up numbers and then claim they were based on annual reports of Duisburg Zoo, as the data from the zoo itself is very different. It unmasks that the fanatical dolphinarium opponents are not interested in information, but in the dissemination of disinformation at all costs.

To look at deaths alone is also complete scientific nonsense. In the wild, most bottlenose dolphins don’t even reach 18 years old (Willis, 2011). The fact that some animals die over a period of 50 years is unfortunately not surprising.

The following study of the median life span (definition question: up to what age do 50% of the animals survive out of all large bottlenose dolphins who have survived the first year of life?)

It is therefore quite possible to say that in the wild, half of all bottlenose dolphins are not 18 years old – and thus this is still a very cautious estimate.

Let us now look at the births: Let us again measure on the basis of the highest median life span found in the wild, covering only 50% of the wild dolphins. In Duisburg, about two thirds of the dolphinarium births passed this stage.

So far we have not considered the animals that died early. 15 out of 25 live-born calves died within the first three years, all others survived this period or are currently living within this period. This leads to a survival rate for the first three years of 40%, as determined by the same method as also found in the wild (Henderson et al., 2014). Looking at the past ten years, the survival rates of the young animals are much better than in the wild: in Duisburg more than 60% of the young animals survive compared to 40% in the wild, which were determined by the same method.

It is therefore possible to say that the bottlenose dolphins in Duisburg Zoo are older than in the wild.

But what about the other Cetaceans kept there?

Catching in the wild comes from a time when it was possible to make expeditions as a zoo and simply catch animals. Today, in modern zoos this is no longer a common practice. At that time it was not possible to reliably determine the exact age of the animals and their health.

The Jacobitas were caught at the end of the seventies/early eighties. We estimate a life expectancy of no more than 18 years – so of course no animal is alive today. JOGY, on the other hand, holds the record for the highest age, as, when he moved from Duisburg to San Diego, he was the oldest known living Jacobita in the world, and later died after 32 years in captivity. The Jacobitas are also known as Commerson dolphins.

Five Inias had been captured. The Amazon dolphins, as they are also called, are extremely rarely kept, but in Duisburg they have done quite well. They were caught in 1975. One rare albino animal, however, was already very old and toothless when it arrived in the zoo and did not survive long. The other four lived well.

Inias have a life expectancy of 20 years. Two Inias in Duisburg have more than doubled this life expectancy. One of them died at the age of over fifty years (on the basis of tooth analyses), another is still alive and is already over forty years old.

The three porpoises reached the zoo as bycatch animals from the University of Odense. Because of their damage, their survival was low from the outset, but attempts were still made to save them.

Three Belugas were also caught. These animals have a life expectancy of 30 years. In two of the animals, it has been ascertained that they have long since passed this age.

Two Beluga females were caught in Canada in an expedition in 1969, and in 1975 a male was added, also from Canada. In 1984 Allua died. At the age of 33, Moby died of heart disease. The male, Ferdinand, now lives in SeaWorld San Diego at more than 40 years of age and is in good condition.

The term “largest dolphin cemetery” is therefore populist and is based on false figures, which have also been misinterpreted. Duisburg Zoo has, of course, lost some of its beloved animals in its more than fifty years of history, but that is hardly surprising in the case of species were most of the wild animals do not even see their 20th birthday.

Nevertheless, it must be emphasised that in the case of bottlenose dolphins, Belugas and Inias, the animals lived considerably longer than in the wild and one broke some age records. In addition, the Jacobitas also set an age record.

At the moment, Duisburg Zoo is concentrating on bottlenose dolphins in the long term, in which they not only enjoy worldwide recognised expertise, but also through their good work can supervise a breeding programme. Furthermore, in the other species, including Inia-Opa, they have nothing to hide and certainly do not deserve to be abused as a “dolphin cemetery”, since all the whales (and not just dolphins, but also porpoises, Jacobitas and Belugas, which are all not dolphins) are kept at all times according to the current state of science.

The “largest dolphin cemetery” is unfortunately caused by humans in the wild. According to the WWF, 300,000 cetaceans are thought to be bycaught every year. In total, this represents 38,000,000 tonnes of marine animals, according to the nature and species protection organisation. Paradoxically, however, animal rights activists pay a disproportionate amount of attention to a few cetaceans which have died in a dolphin habitat over fifty years, some of which are (substantially) older than their wild companions.

While dolphinarium opponents simply make up or manipulate numbers, modern zoos are fighting, among other things, against by-catches, by educating their visitors and by enabling and financing protection projects. The millions of donations that animal rights activists have squandered with anti-dolphinarium campaigns are denied to real nature and conservationists engaged in research to protect wild animals. This research also involves animals in human captivity, because, for example, echolocation, which is important for the reduction of bycatch, can be investigated in detail in dolphins only by using trained animals – it would not be possible with wild animals.

By-catch is just one of the many subjects that modern zoos are dealing with, while animal rights activists and zoo opponents are doing nothing about it, and by their anti-animal use of funds, by setting de facto false priorities they are indirectly causing the whales and their entire ecosystem damage to run into the millions.