Plastic pollution in the sea is a serious issue for species and nature conservation. Now there is a new, strong and important coalition…

As humans we seldomly realise just how contaminated our seas and oceans are. This may be due to their vast size, or because the image we have of them is very often just the image of a tourist beach. The following video is a glimpse of the reality few of us see:

This needs to change, is the view of the EU Commission, her important partners are professional, modern and recognized aquariums. Commissar Karmenu Vella explains that these are a “window into the ocean”. They inspire people, show us what we need to protect and bring the millions of visitors closer to becoming “friends of the ocean”.

Loro Parque and the new aquarium of the Loro Parque-Group, Poema del Mar, in Gran Canaria, have joined the fight against plastic, together with many others. The recently inaugurated aquarium displays exactly those habitats which suffer most under the effects of plastic contamination.

If we follow the playlist, we see the affected habitats and the animals which live in them. Nobody protects an anonymous habitat, of which we have no image, no notion. The possibility given to visitors, to explore the ocean, and to get to know its inhabitants, that´s what connects Poema del Mar with the Top-aquariums worldwide. 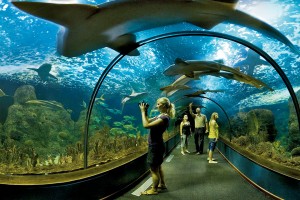 The aquarium inside Loro Parque and the zoo as a whole is, like many other zoos, banning more and more plastic. Weeks ago one-way plastic bottles were changed for those compostable. A few months ago several other plastic containers were also swapped. The aim is to reduce the use of plastic by at least 80%.

Awareness-raising campains about plastic and its detrimental effect to the environment are also given. Information on this topic can be found in the zoo´s aquarium. This way experiencing the animals, as for example in the impacting shark tunnel, gets linked with the concept of using less plastic. It is a concept used by many modern zoos to emphasize the importance of protecting our oceans.

It is important to have a strong coalition. This one carries the name “World aquariums #ReadyToChange to #BeatPlasticPollution” and wants to unite at least 200 aquariums by 2019 in the fight against plastic pollution. The aim, together with the EU Commission, is to sensitize the many millions of visitors about the topic.

Plastic aquariums in the frame of #OurOceans

Several aquariums have impressively shown the consequences that plastic pollution leaves in the sea, by creating aquarium tanks in which these are authentically displayed. We visited one of these at the zoo in Duisburg:

Once more it is shown how important modern zoos are, to serve as successful intitutions for education, conservation and research, as well as to be ambassadors of the oceans – a, through pollution, massively endagered habitat.