This dog died at the hand of PETA - like many others, although they were healthy and adoptable. | Photo from http://whypetakills.com (Nathan J. Winograd) 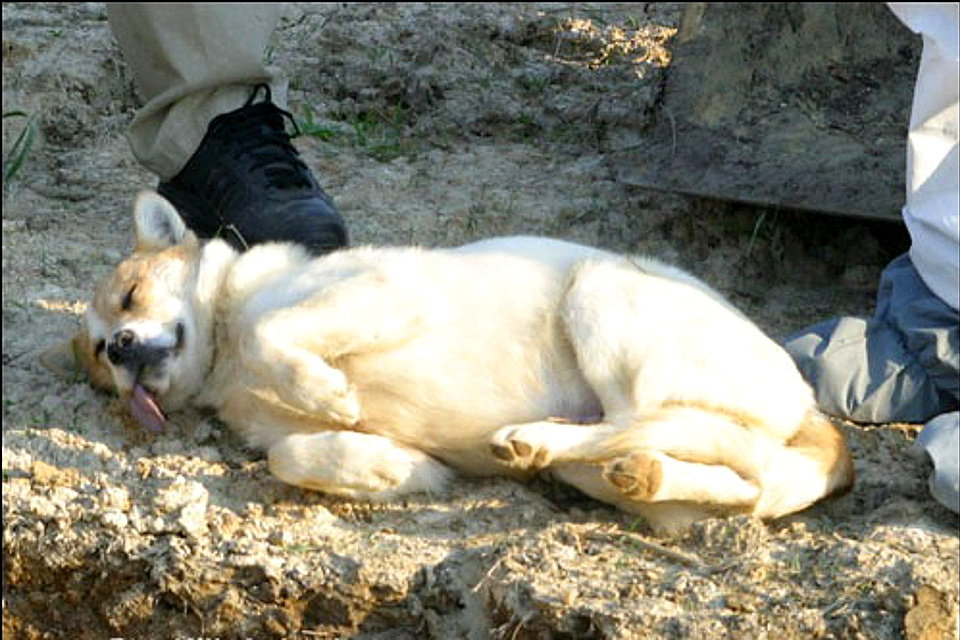 This video has a look on a cooperation between One Green Planet and the radical animal rights organization PETA.

On One Green Planet PETA employee Katherine Sullivan, a senior online news content producer, shares again the weak defense of PETA against the killing allegations they frequently face. It only unmasks the tactics of the radical animal rights organizations and couldn’t be farther from the truth. This exposes One Green Planet once again. This platform is known for sharing Fake News in favor of the animal rights ideology.

No difference between killing and euthanizing?

PETA’s shelter is a kill shelter but during the whole article Sullivan acts like PETA would manage a no-kill shelter while spreading misinformation about the real no-kill shelters. The no kill movement doesn’t want to cancel euthanasia, they also don’t end euthanasia or avoid that. They just don’t kill animals if it’s not in their best interest while PETA does that. PETA kills healthy animals even without giving them a proper chance to get adopted.

Euthanasia as a “service”

The overall death rate of PETA since 1990 is 83.5% of the animals they take in, are euthanized by them. This is a lot, it’s a death rate you would not expect from the shelter. In 2019, PETA adopted 1.8% of the dogs and 0.8% of the cats they took in – this is a disastrous quota. Sullivan talks about some anecdotes and claims than: “my anecdote certainly prompts most listeners to nod their heads in agreement that euthanasia is a service that should be available to all.”

This shows her misunderstanding: euthanasia is not a service that should be provided to all. It’s a service that should be provided to animals that truly suffer but this is not what PETA does exclusively because then they would make a perfect no-kill shelter. PETA might also euthanize but they certainly also kill animals. No one is really arguing against euthanasia but against this killing part of the whole story that Sullivan is just not talking about.

PETA often advertises that they offer a free euthanasia service but they are not the only ones in Virginia doing that. The Fairfax County Animal Shelter in does the same with a death rate of around 20% – that’s also significantly smaller than  over 80%. So, using this as an excuse doesn’t work. The idea that all these shelters would be so evil and only PETA would be the one and only great facility, is more a conspiracy theory that PETA needs to cover their questionable killing policy.

The agenda behind it

Calling PETA’s shelter a kill shelter therefore seems to be an understatement. It’s a death shelter and that’s pretty logic because PETA aims to end every kind of animal husbandry. It seems to be the most efficient way to kill most of the animals they get access to and green wash that. So, PETA is not about love of animals, it’s about an agenda that is far away from being beneficial to animals.

The animal rights ideology aims to end every kind of animal husbandry – even if it’s saving their species. PETA, for example, are against the subspecies-saving attempt to artificially inseminate the last northern white rhinos because they think this would be a rape, which is wrong and an insult to real rape victims. This is the last chance of the subspecies to survive, if it’s not done, they will be extinct.

In fact, PETA apparently is against the survival – the survival of animals and their species. They obviously kill them and neither want species to be saved by zoos and aquariums, on the contrary, they want to see all zoos and aquariums closed because they’re against animal husbandry. PETA is not about animals, it’s about ideology and implementing this for any cost. This is why this organization is so dangerous – especially for animals.