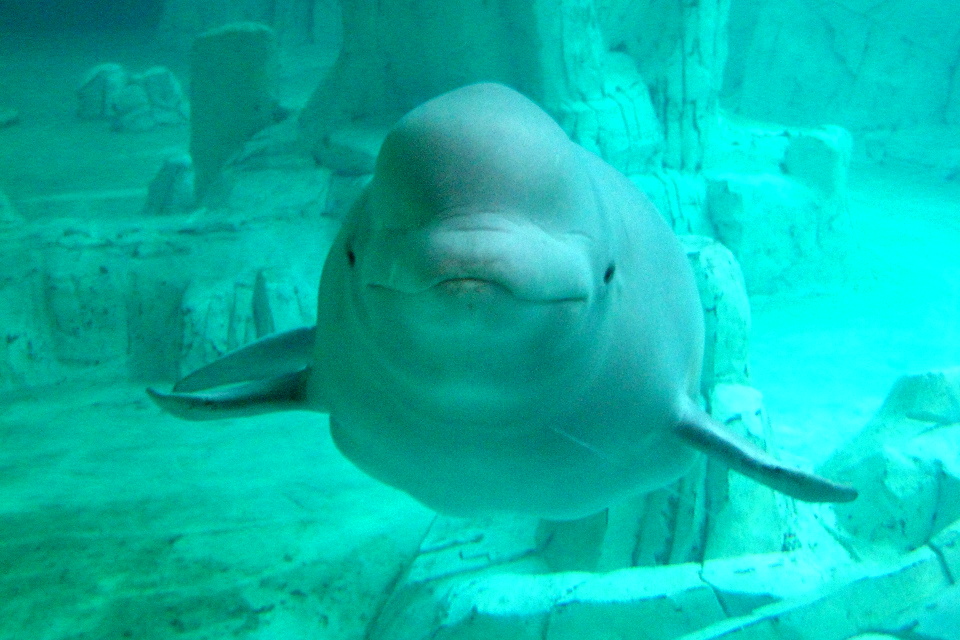 Sea Life creates a picture of its net cage project called “Beluga Whale Sanctuary” that has nothing to do with reality and sells fairy tales to the public.

Sea Life and its Beluga Whale “Sanctuary” of fairy tales

Sea Life, a daughter of the entertainment company Merlin Entertainments, uses a so-called “Beluga Whale Sanctuary” for greenwashing the actual and former whale husbandries together with the animal rights industry. The Beluga Whale Sanctuary placed in the whaling nation Iceland with no whale protection laws worth mentioning first looks like a really bad joke but it’s true.

Fairy Tales are told on and on

In order to greenwash the company and let net cages seem to be an appropriate housing, although they are not paced where belugas usually occur, Sea Life makes up all kind of fairy tales. A really ridiculous one came with this tweet.

When it comes to eating in their new home, our team will continue to provide food for Little White and Little Grey. However, there will be plenty of fish, crabs and other creatures in the bay – so they can choose to hunt their own food if they want! pic.twitter.com/WKxh5sgsq6

Why is it ridiculous? Well, it’s pretty easy to tell, when you know how you feed whales in human care. You have to control the food and the animal. That’s why whales in professional human care are weighted on a regular basis and that’s why the food is controlled. So, this picture they create will either never become real or the animal might face some health issues.

In addition, this would not be really good for the waters the belugas live in because they are in this net cage for all time and might completely destroy the populations that live their naturally pretty quickly, if they hunt. That would be a problem for the whole bay. But it’s more likely they won’t hunt. The net cage is at the same place where orca Keiko lived in net cages and he also never hunted there.

Feces will become a problem for water and habitat quality

Belugas eat a lot and produce a lot of feces because of that. It’s an amount that the bay where they live is not prepared for. Feces are a problem for the ecosystem in fish farms, that use net cages in the open sea, too. One beluga eats about 18-27 kilograms of fish every single day and that produces an amount of feces the small ecosystem of the net cage is not used to.

So, this will decrease the quality of water because the net cage is a pretty big toilet as well without any filter. But it’s not only this pollution that the habitat has to face. The island Heimaey is dependent on boat traffic to get resources. The bay for the belugas is next to the only boat traffic route – the route to the capital of the island, so often boats need to come to the harbor and leave the harbor. You can view a density map here (just click on the symbol with the connected dots).

So, feces together with this pollution of the traffic will be a bad mixture for the “sanctuary”. The net cage of Keiko was even smaller than modern installations of that time back all those years and had better water quality. So, the whole idea of this net cage installations called “sanctuary” are just greenwashing. They are by far not better than proper installation in zoos and aquariums.

Like in the case of Keiko, almost 20 years ago, Sea Life believes that, as soon as they place the two belugas in the water, they will happily swim all around the 35,000 sqm seapen. But that was not the case with Keiko, he was floating motionless inside the small 500 sqm floating cage during almost all day and showed no interest in exploring the bay. In order to take Keiko to explore the bay and exercise properly, Ocean Futures needed to hire trainers with experience in killer whales, other ways the animal didn’t move. He just waited motionless to the next feeding time.

Hence, it is clear that after one year living in a small concrete pool, virtually without exercise, and getting fat to cope with the low water temperature and rough wind in the bay, the two belugas will not swim happily to explore the bay. It is clear that Sea Life is going to need help from professional trainers to manage these poor belugas. They have just changed the tranquility and protection of a zoo facility to be exposed to cold waters, pollution, noise and strong winds that sometimes will make impossible even bringing the fish to the animals to feed them properly. Because there is no way that this animals, that got used to be fed by humans, start hunting spontaneously. The stupidest fish will easily escape from them simply swimming through the metal mesh. This also could change the biodiversity and the whole ecosystem of the bay.
Share this post