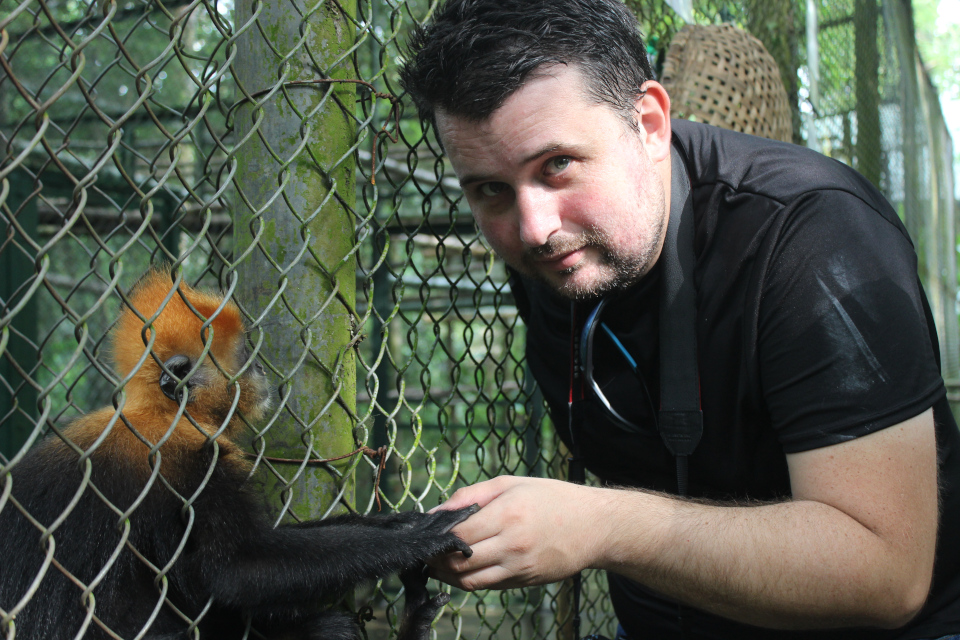 Pierre de Chabannes has a passion for conservation and is one of the leading animal photographers worldwide. In the interview, he’s talking about a great project.

Most friends of zoos and aquariums worldwide surely saw his work – maybe without knowing that it was his. He’s one of the best photographers in the zoo world with an impressive archive of species he already photographed. The work he did already is more than great and surely many of you know, who I’m talking about: Pierre de Chabannes or Pierre Wildlife (www.pierrewildlife.com).

How did it all start?

When you look at the webpage and scroll around, you will get to know, that this is a work that can’t be done overnight. “About 15 years ago, I was a touring professional drummer and when I had time off, wherever I was around the world, I was trying to go to the local zoo and I started documenting on photo all the amazing species I was fortunate to see. The gallery was quite successful because of some very unusual species I could photograph, particularly in South East Asia.”

Surely, many zoo photographers can connect with his story: You travel around, get passionate about animals and people like your work a lot. But how did he become so professional? “You know, I have always loved sharing my experience and the bits and pieces of knowledge I have been lucky to gather through experience and research. This prompted me to create a bigger website featuring education documents, each showing a particular species or subspecies.”

“That’s how Pierre Wildlife came into existence. It took me about 3 years to fully design the species files and deciding to make them accessible to everybody, first by having them available for free on the website to view, second by making the content simple and understandable by anyone from school to senior age. To sum it up, Pierre Wildlife is a project that creates and propagates education about wildlife and its conservation.”

Passion for wildlife and its conservation thanks to zoos

Building a webpage like this requires a lot of work, but Pierre’s passion for wildlife started early – thanks to his parents and modern zoos: “It all started at a very young age. I was barely walking by myself and my family was taking me to visit the old Menagerie du Jardin des Plantes in Paris. At that time in the mid-1980s, I was seeing a huge amount of rare species including the last African forest elephant in an European zoo in the old Zoo de Vincennes without even being conscious of it.”

“I am forever grateful to my family for not only taking me to the zoo at least once a month but also for buying animal books to explain to me what I was seeing. One of my early and still to this day biggest love are snakes. And I was lucky that there were lots of nice venomous snake species in the old Vivarium at the Menagerie! Then, I started asking for more books for my birthday, including English books because they had better pictures on them and more unusual species featured!”

He was motivated by his experiences at the zoo to travel and, in 2005, thanks to his father, he could make a trip that strengthened his massive interest in animals: “Another defining moment for me was my first trip to South-East Asia. I was just blasted by the diversity of animals out there, the extraordinary forests and, at the same time, I fell in love with the culture, the kindness and openheartedness of people. It was truly an awakening for me and now I do my best to go back there every year, either on assignment or with my own funding.”

Without zoos this would never have happened and it emphasizes why these places are so important as a place of motivation to conserve wildlife. His great work attracted the attention of the possibly best-known zoo photographer around the world: “The last defining moment I can think of is when I was hired by Joel Sartore and National Geographic to become a consultant for them in 2016. This remains the high point of my carrier today.”

How to make good photos at the zoo?

When you interview an expert like Pierre, you surely want to ask him what makes a good photo of an animal? We did and here’s his answer: “it really depends what you are trying to do when photographing. Of course, no matter what, a photo is always better when you follow a few technical guidelines, when the subject is in focus, the light reasonably good and the photo bright enough but this should go without saying I think.”

This is very important and many photographers like to ignore that. How good a photo is depending on your personal goal, nothing else. “My photos aren’t better than average because my goal isn’t to produce an artistic impression but to document a species with physical characters being obvious. So, it doesn’t really matter if the background is an ugly rusty fence and bare concrete or if it is a lush rainforest. Of course, most people like it better when the background looks natural so I tend to favor these pictures whenever possible. So, a good photo for Pierre Wildlife would be a photo where the species photographed is identifiable instantly and with accuracy. The rest comes second.“

But what about going for photos that are not only documenting? “Now, if you are more into the photography itself and less the documentation process, besides the little technical basics of composition (rule of thirds for instance), the most important is the background. You can either create it by physically adding a black or white board behind the animal like Joel Sartore is doing or you can work with the conditions but remember, a fence never ever looks good… it has to be natural-looking to catch the eye in a positive way. This is why zoo photography isn’t always easy!”

There’s even one more important aspect: emotion. “That’s the secret behind Joel Sartore’s amazing pictures and the key to his success. His best ones all convey some kind of emotion and this is usually because of the eyes of the animal that is being photographed. The animal can look curious, inquisitive, scared, angry, happy… there is always something happening and Joel is capturing that beautifully.“

Going for a great goal

Pierre’s goal is “to document as many animal species and subspecies as possible, in photographs of course but also as educational documents and making these resources available for free to anyone. The more I became involved in education by giving lectures while I was traveling and teaching to students who want to become zookeepers in France, the more I realized how crucial education is to conservation and to the survival of nature, and our own survival.”

He combines visiting zoos and using wildlife trips. He tries to raise awareness for species and make people care about them: “Who would care? Well, nobody if we don’t educate them and that’s the purpose of Pierre Wildlife: to educate. In this world, there is no time for wildlife, we are too busy with sensationalism. Kim Kardashian’s backside is much more attractive to most people than the Whitehead’s trogon will ever be.”

“So, the strategy is making the education accessible to anyone for free and having it pop up under our very noses. That’s why I am trying to build phone and tablet apps that would create some sort of pop-up on a daily or weekly basis: something like “the species of the week” app that would allow people to benefit from a bit of free education. That’s how you start raising awareness, and that’s the first step to caring and helping to conserve.”

“I have managed to document nearly 12,000 animal species and subspecies, more than 2,100 documents are already published on the website but I want to do much more. There are critically endangered species that have barely been observed, studied or photographs, I want to try to find them, document them properly and make them known with my project.”

He already financed a lot by his own but an app is so complex and so expensive – it’s not possible to do that with a finger snap. “I also need funding to develop this app project I was mentioning earlier and think of other ways to propagate these free documents. So, for those who feel like helping, I have created a crowdfunding page, using Patreon, where you can pledge monthly from $5 a month to $150. The URL of the page is www.patreon.com/pierrewildlife. In exchange, you can get exclusive content, specially designed for patrons, that can go from a simple thank-you card to unpublished pictures, trip reports, newsletters.”

You don’t have to be rich to help Pierre: “What is important to realize is that even the smallest contributions do help tremendously. If even half of my followers on Pierre Wildlife’s Facebook page would pledge just $5 a month, I would be reaching all the goals I have set for Pierre Wildlife and even keep some money to donate to conservation associations I know are in need of funding and support. This is all within reach and I strongly believe that contributing to such project is contributing to conservation.”

Pierre’s amazing project is a great example for conservation photography. Media allows people to see animals that would probably never experience. Of course, a photo is nothing against experiencing animals in real life at a zoo or in nature, but it’s an important way to start. Without Pierre’s photos we would know nearly nothing about rare species and would not even be able to see them at all.

His project has one primary goal: education and that’s the basis of conservation. One photo can change the world of a small species nobody would know when it would not have been looking in a camera of Pierre. The key to conservation is making people know and feel. Pierre wants to do both with his photos. You can easily look on his page and see species you never saw before. This is a true treasure.

Pierre has the chance to build an archive full of photos of rare species and motivate people to care and then use the knowledge he shares to get involved in conservation. That’s really important and we need that because his work also amends the work of zoo, museums, and other cultural institutions. His great talent and passion has the ability to change the world of species that most people would never see because he shares his photos with the world and people suddenly start to care.