A trainer kisses a bottlenose dolphin in the dolphin lagoon of Loro Parque | Photo: zoos.media 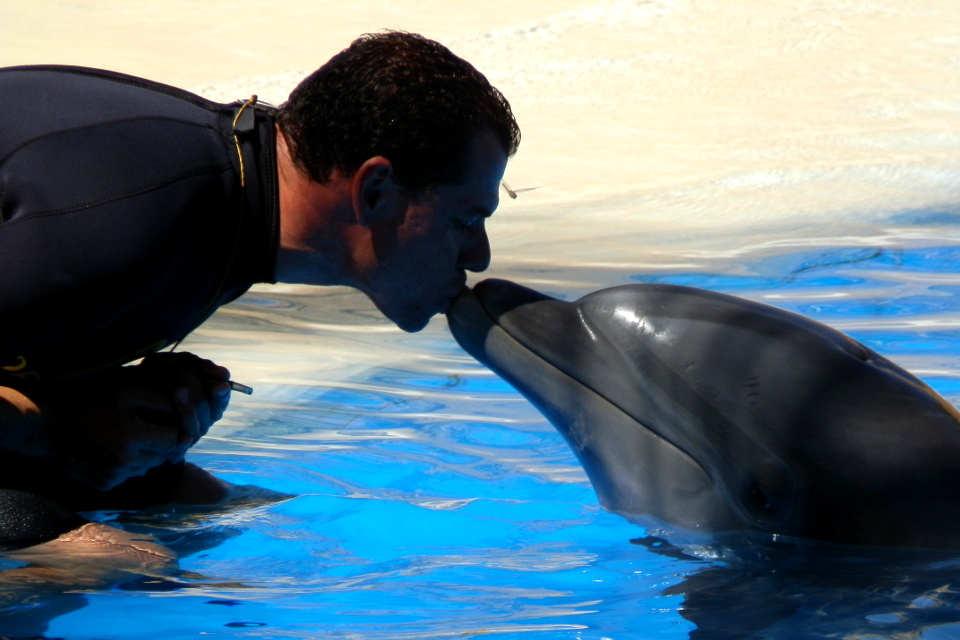 The update of TripAdvisor‘s Animal Welfare Policy ignores science, harms conservation and is not in accordance with best practices of animal welfare.

TripAdvisor caves in to the populism of the animal rights industry and ignores science, animal welfare, and conservation. For a long time, they made good profits from zoological institutions and now they betrayed them and publish a statement on their blog which is against every fact in the whole issue. Travellers should be very careful that they won’t betrayed by this questionable tour operator just like the conservation centres were now.

“We hope that this generation of whales and dolphins in captivity will be the last.“

Does this sound nice to you? Maybe because you don’t know what it really means. Let’s translate this euphemistical sentence in reality: “We want animal cruelty for every whale in human care.” Why is this the correct translation? Because TripAdvisor wants a complete stop of breeding. This is animal cruelty.

A general breeding ban for whales is not possible without animal cruelty. You either must destroy the social groups because you have to separate males from females. While there are bachelor groups of dolphins in the wild, bachelorette groups could never be found. Another way would be to use medication to stop breeding but this is neither 100% sure nor good for the whales. The contraceptives available for cetaceans are only for a short application time and were never made for implementing a complete breeding stop which would mean a medication over decades. They have serious side effects that would have a higher possibility to occur during such a large application period – this could kill the animals.

“For the current generation of whales and dolphins in captivity, we believe seaside sanctuaries are the best long-term solution.”

People believe in many different things – even things that aren’t existing. There is no seaside sanctuary for dolphins like killer whales or bottlenose dolphins in the whole world. All plans of the animal rights industry failed and are failing. But even if they would exist, they wouldn’t be better. A seaside sanctuary is a euphemistical name for a net cage. The animal rights industry is already using the name sanctuary for bad animal husbandry for years.

Such sanctuaries, for example for elephants, are famous for mistreating animals because the animal rights industry has no idea how to house animals properly. They are experts in killing them – the elephants in these sanctuaries die early because of mistreatment or veterinary issues modern zoos know to avoid. PETA has got a shelter in which more than 39,000 animals were killed – a shockingly high number of these animals were healthy and adoptable. This is the true face of the sanctuaries and shelter of the animal rights industry.

While husbandries of the animal rights industry are places of death, husbandries of modern, accredited, and certified zoological institutions are places of survival. The survival of animals in need, the survival of species, and the survival of nature. TripAdvisor seems to prefer the places of death. Science already confirmed in many studies that dolphins and other whales thrive in human care. Bottlenose dolphins live longer, are less stressed, and are healthier in human care compared to the wild. These are facts. TripAdvisor doesn’t care and prefers to believe an already scientifically refuted ideology of the animal rights industry.

“We, the undersigned members of the scientific community, wish to acknowledge the importance of marine mammals in zoos, aquariums, and marine mammal facilities, and express our support for research conducted at these facilities. We know that critical research findings have come from studies of dolphins and related species in managed care environments, which have provided the vast majority of what is known about their perception, physiology, and cognition. […] The benefits of such research extend well beyond the animals in zoological facilities. The interpretation of data from field studies is directly informed by what we have learned about the cognition and physiology of these animals in managed care settings. […] The advances that have come from research in marine mammal facilities could not have come from studies of animals in the wild. […] Indeed, as with research in any discipline, a comprehensive understanding of these animals requires a combination of both in-situ and ex-situ studies; studies based in the wild and in zoological settings. This idea is neither new nor specific to marine mammals, but is critical to the way scientific discovery works.” – more than 80 experts, specialists, and scientists being the most renowned in the field of marine mammals

So, TripAdvisor ignored the vast majority of experts in this field. They caved in to some wannabe experts and fake scientists being part of the animal rights industry. These people only want to build their own SeaWorlds and try to blackmail animals from zoological institutions because no one would give animals to them in the normal way because they are not competent enough to run a humane husbandry of marine mammals.

From now on, TripAdvisor stands for the support of animal cruelty and the animal rights industry that aims to ban every kind of animal husbandry. Most people ignore the fact that the animal rights ideology is against every animal husbandry and they want to end it – they don’t care if it’s a dolphin in a zoo or a cat at home, according to the animal rights ideology every kind of husbandry is wrong and has to be ended. From now on, TripAdvisor is supporting the lobbyists that want to close all zoos, end pet husbandry, and stop the breeding of animals – even breeding for conservational purposes.

So, in the end, TripAdvisor prefers to support the extinction of animals to actively supporting the survival of animals, species, and nature. TripAdvisor had a huge drop in the stock market after the decision made headlines in the news. All in all, the company is not in a good state and is losing money on the stock market for years now – pretty similar to Thomas Cook. A few months ago, Thomas Cook followed the activists’ agenda and just a few days ago their declared their bankruptcy.

___
* The video became a part of the article after it was published.