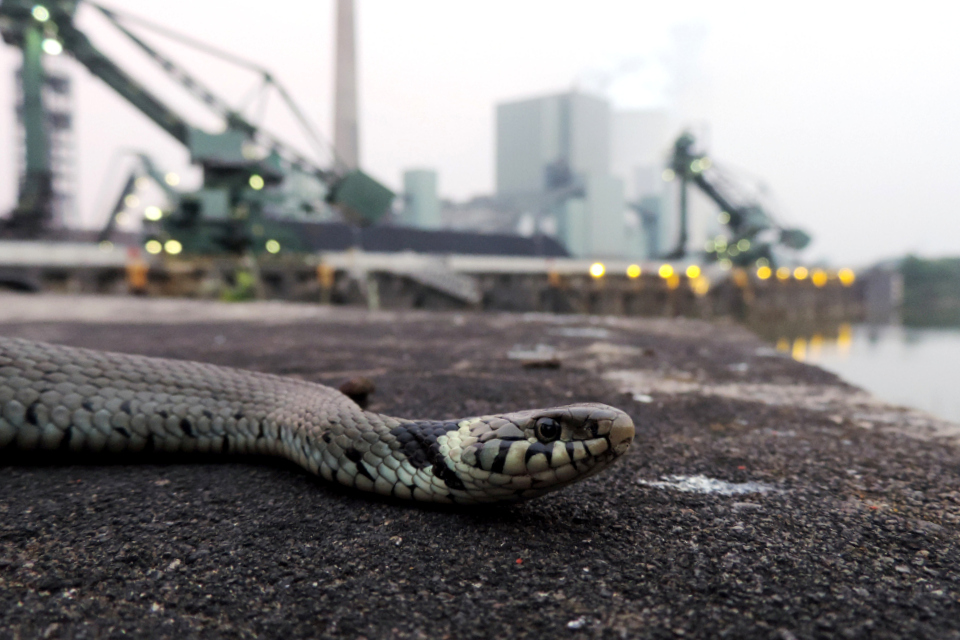 Duisburg zoo is actively supporting the survival of the ringed snakes in the ruhr area in the west of Germany with breeding, reintroduction and education.

That Duisburg Zoo is studying ringed snakes is nothing new – this has already been happening for several years. However, this information has developed into an important project which supports the local population with major species protection measures.

For a long time large parts of the Ruhr area were depopulated of grass or ringed snakes due to a lack of habitat and pollution. Only about 10 years ago isolated animals were seen again. This good signal motivated the conservationists of Duisburg Zoo to make it easier for the returner to restart.

The ringed snake has a problem: many people think that the animal is poisonous, understandably panic and kill the animal in an overthrow to save the threatened life. This is a mistake. For this reason Duisburg Zoo has been comprehensively explaining these animals for five years in free animal protection classes in Duisburg primary schools. In addition, the support association has organised the seminar “No Fear of Snakes”. Environmental education is an enormously important part of this project.

But Duisburg Zoo wanted to contribute even more strongly and spoke to the Office for Environment and Greenery of the City of Duisburg as well as the Biological Station of the Western Ruhrgebiet. This cooperation is another major pillar of this project. In order to be able to support stocks sensibly, properly functioning monitoring of the inventory numbers is required. Storm damage has caused the various sites to be examined only in 2015. Now we are installing so-called snake mats, by which the animals are gently fixed. These snake mats are regularly checked, and the animals are taken out and identified by the individual abdomen pattern.

In addition, other animals are counted as well: the number of prey animals for the snake and animals for which the snake itself is prey are crucial for achieving a comprehensive profile of the habitat so that it is possible to react accordingly. These investigations have been very successful, but it is still a little too early to see a clear trend.

What is certain, however, is that there are still too few ringed snakes, and therefore it is necessary to support the population, so that the ringed snakes can return to their real natural habitat. An important supporter is the Foundation for the Environment and Development of North Rhine-Westphalia. It has not only supported the printing of flyers and field studies, but also the construction of one of the zoo’s ringed snake rearing stations in the aquarium building.

A report from Gelsenkirchen was very interesting: a local inhabitant had discovered a ringed snake fledgling in his compost heap. It was unfortunately too late, but in 2016 he knew about it in time and the zoo took 12 fledglings into its care. It is thanks to the know-how of the experienced animal keepers that these animals were then hatched so successfully to prepare them for a life in the wild.

This allowed 228 animals to be released in a nearby landscape conservation area. This was an important boost for the population and enormously valuable, because without the zoo these animals would not have made it. 80 animals were moved into the rearing station to care for the animals for two years, before they could be released in a meadow landscape in Duisburg Walsum, at a corresponding size and thus less susceptible to potential predators. In groups of up to 15 animals, they live in terrariums and are currently fed with guppies and leopard danios, which they hunt themselves.

So we can already report the first important successes and be cautiously optimistic about the coming years for the ringed snakes. With the project leader Volker Grün, many zoo employees are working voluntarily to give the ringed snake the chance it deserves. In addition, members of the Society for Water Studies e.V. and other volunteers are also helping.

Without this voluntary commitment, things would be worse today for the ringed snakes in the Ruhr area. This project is a new example of how zoos, even at the front door, are protecting species. Thanks to the support and cooperation of many people, something like this becomes possible which without the zoo, its know-how and commitment would not be possible.

One can be confident that the three pillars, education, stock determination and population management will make sure that in the long term it will be possible to see ringed snakes again in the Ruhr area. They are a building block of an ecosystem impaired by environmental pollution and habitat reduction – a permanent disappearance would be a sad loss and a return an important gain.
Please contact the zoo directly for advice on how you can help yourself.